Ola CEO Bhavish Aggarwal recently responded to a news report announcing a possible Uber-Ola merger. In a tweet, the senior executive called the report “absolute rubbish” and said Ola is “profitable and growing.” However, the tweet even reignited speculation that Uber is considering leaving India, as it reads, “If any other companies wish to leave India, they are welcome.” India Today Tech has reached out to Uber to find out if the Ola-Uber merger rumors are accurate. The company also affirmed its commitment to the Indian taxi market by referring to Uber CEO Dara Khosrowshahi’s old tweet.

Uber’s spokesperson flatly denied the latest ET report, echoing Aggarwal’s response in his tweet. The spokesperson simply stated, “We are not, nor have we been, in merger talks with Ola.” 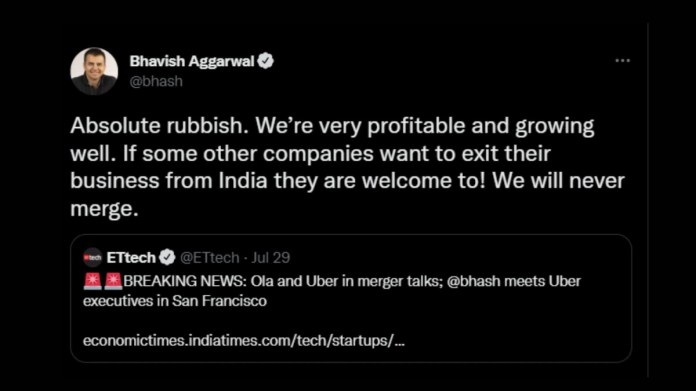 When asked if Uber plans to leave India, the company’s spokesperson shared a link to Uber CEO Khosrowshahi’s old tweet, which was posted in response to Bloomberg’s initial report. . The tweet reads: “Amazing that they [Bloomberg] ran this story – there is no truth to this story – has not been explored, has not been considered, discussions have not taken place, at any level – and we have it tells Bloomberg as such. Total clickbait (or sub-bait in this case).

In June 2022, Bloomberg reported that Ola and Uber were struggling to “turn” a profit in fast-growing but price-sensitive India. The report had suggested that the US-based taxi aggregator could exit the market, but retain a stake in the dominant local player to exploit future growth. Uber has similar deals in China (with Didi Global) and Southeast Asia (with Grab Holdings).

The latest ET report notes that Ola CEO Aggarwal traveled to San Francisco, US to meet with key Uber executives. The report claimed the two had talks four years ago when mutual investor SoftBank pushed for a merger. The report adds that those conversations have apparently “revived in recent months as Uber and Ola face growing pains.” As mentioned, Ola also denied the report.