TikTok parent ByteDance is apparently working on a new app to help users discover new music. According to a trademark application to the US Patent and Trademark Office, the app will be called “TikTok Music”, although the exact launch date remains unclear. The app can help the company expand its operations, as the main TikTok app not only promotes short video content but also relies heavily on music. It will also compete with music streaming giants like Spotify, Apple and Google. ByteDance already offers a music streaming app, dubbed Resso, which is still available for download in India, although its sister TikTok is banned in the country for security reasons.

The brand points out that TikTok Music by ByteDance will allow users “to live stream audio and video interactive multimedia programs in entertainment, fashion, sports and news.” It will offer “downloadable mobile apps featuring podcast and radio broadcast content.”

If the TikTok Music application is indeed in preparation, we can expect to see it include some tools already available on Resso. For example, the Resso app features a TikTok-like scrolling interface and displays recommendations based on users’ browsing history – similar to Spotify and YouTube Music. It also allows users to view lyrics, download music for offline listening, and search for songs in the background, like Shazam. Notably, the app provides easy access to deleting user accounts. However, it is only available in certain markets like Brazil and India. 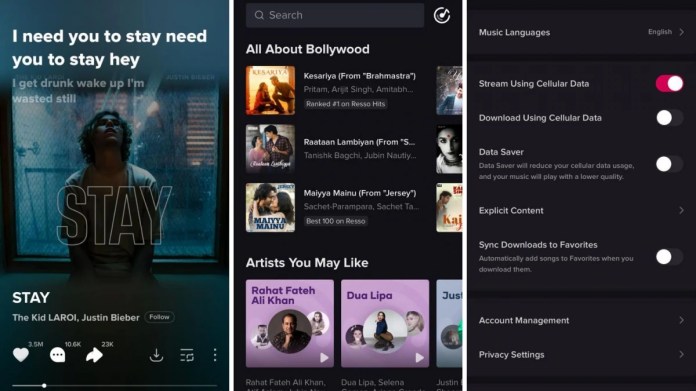 In the Brazil-specific TikTok app, there is also a dedicated button to direct users to Resso.

Once the app is officially launched, Resso will likely continue to operate in India under the same name, while the Brazil-centric app may be renamed. TikTok Music will aim to make a name for itself in key markets like the US and EU. App tracker Appbrain shows that Resso already has over 100 million downloads worldwide.

According to ByteDance’s expansion plans, we can expect the company to launch TikTok Music Originals, similar to Spotify’s in-house content. As expected, all the songs available on the app will be able to be used on the main TikTok app.