Instagram has established itself as one of the platforms preferred by celebrities. (Infobae)

In the last weeks, Danna Paola has been in the midst of public scrutinysomething of which actress and singer apparently she is already used to it because she has been in show business since she was very young.

Firstor they criticized her for the recent physical changes she presented -Her defenders accused these people of body shaming the singer-, to which she responded by saying that she feels “sexier than ever”.

also received criticism for the release of his most recent songXT4S1S -which has been a success-, which has been pointed out for being an allegory to substance use, responding that he is only expressing his art and that music is his drug.

Danna Paola has also given something to talk about on Instagram, where she has almost 35 million followers. The daring photographs and interesting videos that he publishes on the social network generate millions of views, thousands of likes and hundreds of comments.

These are the photos and videos of Danna Paola that have swept Instagram.

The origin of Danna Paola

Danna Paola Rivera Munguiabetter known in the art world simply as Danna Paola, was born on June 23, 1995 in Mexico City. She is a singer, actress, model and songwriter.

She is the daughter of Mexican singer Juan José Rivera and her mother is Patricia Munguía. danna He began his career when he was only four years old. when he participated in the program Sesame Street in 1999. A couple of years later, in 2001, the young actress got her first leading role of the novel María Belén, a performance for which he won his first award for Best Children’s Performance at the Bravo Awards.

He also signed a contract with Universal Music and recorded his first album. In 2004, Danna starred in the novel Amy, the girl with the blue backpack and released his second album called Ocean. After, in 2008, the artist made her film debut with the movie Tear my life and a year later he gave life to “Patitio” in Televisa’s children’s-youth soap opera, Dare to dream.

Two years later, the actress and singer became part of Disney and Pixar and gave voice to Rapunzel in the animated film Tangled. In 2016, the teen star returned to the big screen with The simplest thing is to complicate everything and a couple of years later, in 2018, Danna Paola was part of the Spanish Netflix series, Elitewhere she played the role of Lucrecia, which earned her greater international recognition.

In addition to music and acting, Danna Paola She has also ventured as a fashion designer, taking out her own line named Danna Paola, by SexyJns. She has also been the face of brands in Latin America such as L’Oréal and recently became the first Mexican ambassador for the Fendi brand.

As for television shows, in October 2019 she was confirmed as a judge of the new edition of the original musical reality show on TV Azteca, The academy. His time on this television program was marked by discussions with some participantsincluding a contestant named Gibrán, whom she reprimanded nationally after she found out he had allegedly insulted her for his comments about her performance. 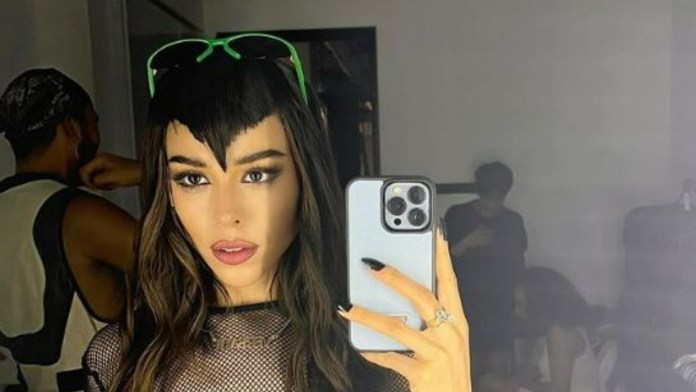 After Gibrán’s presentation, Danna Paola began flattering him, but it was all sarcasm. “Tell me if that’s not how I’m a culera with you. Don’t think I don’t listen to what you and Francely say about me at The Academy. I think it’s disrespectful to insult a woman, if that’s how you refer to me because you don’t like my criticism, I don’t want to imagine how you talk to Francely or how you express yourself about any other woman. I am in this chair not to look pretty, it is because I have been in this for 20 years and I have never disrespected anyone, ”she said.

Faced with these facts, which she always assured was not a planned performance, the artist broke the internet and it became a meme and even stickers by WhatsApp; Others criticized her for how severe she was and for having left him in a bad way on the national network.

In 2017, she resumed her character as María, the protagonist of the musical Today I can not get up. In October 2018, she released the single Happy ending as part of the soundtrack Elite. In 2019 he released his EP Sie7e in which hits like hey paul, which refers to an adventure he had as soon as he arrived in Spain; as well as the song Sodiumwhich refers to the LGBTTIQ+ community.

In May, she released the music video for her single Sola on digital platforms, which was recorded with a Samsung Galaxy S20 smartphonebecoming the first video of a Latin artist recorded in this format and in which various artists such as Sebastian Yatra, Luisito Comunica, Isabela Merced, Lali, Esther ExpositoGreccy, Alejandro Speitzer, among others.

Danna Paola released her fifth studio album called KO on January 13, 2021, released a day before the initial date since was leaked by accident on Spotify. Months later she participated in the clip not one morea song by Aitana that talks about abuse against women.

His most recent song is XT4S1Swhich adds millions of views on various digital and streaming platforms.