“There must be respect for the microphone”: what Son Gohan’s new voice said about the Mexican dubbing

The dubbing actor who currently plays Gohan in Dragon Ball Super Super Hero, Luis Manuel Ávila, commented exclusively with Infobae Mexico on the process he carries out when giving voice to a character.

The person in charge of giving voice to Son Gohan in the latest movie Dragon Ball Super Super Hero is the singer, comedian and voice actor Luis Manuel Avilaremembered for playing Junior of the Family P. Luchementioned that despite being invited by Lalo Garza he had to prove his ability to earn the spot.

exclusively with Infobae Mexico the artist commented all about the dubbing in spanishsince for him your job is like being on vacationhe loves being on stage, addressing hobbies and recreating characters together with the rest of the cast, allowing the public to move to other worlds.

The great project of the recent film Dragon Ball Super Super Herois his second participation in the mexican dubbingsince the first character he played was Cerberus of The Knights of the Zodiac: The Lost Canvas.

Currently the comedian is the new voice of Gohan and unlike other artists he considers that training as an actor gives enough tools to do dubbing.

Despite being invited by Lalo Garza he had to pass the casting tests to be able to keep the character and he recalled: “I always fall in love with the process, not the result since that does not depend on me because there are too many issues that one as an actor cannot control, however the first part is totally up to me, “said the comedian during the interview.

Within the previous work and during the recording of the film, he commented that the most important parts of the development are: prepare as much as possible, get to know the character to be played, concentrate on directions and adapt to what is requested.

– What do you think about actors doing dubbing without having a specialty in that branch?

“I believe that all of us who are in front of a microphone are actors from the outset, since at the time of dubbing you have to be an actor Yes or yes because there is no other option. Always there must be respect for the microphone and to what the development of the profession implies”, responded Manuel Ávila.

“I believe that dubbing in Mexico has always been one of the most important, since it includes all kinds of voice colors. At the acting level I have never believed that there are sectioned actors because the moment we develop a certain discipline we focus on the rules that must be followed”, in such a way that there are more opportunities to encompass characters. 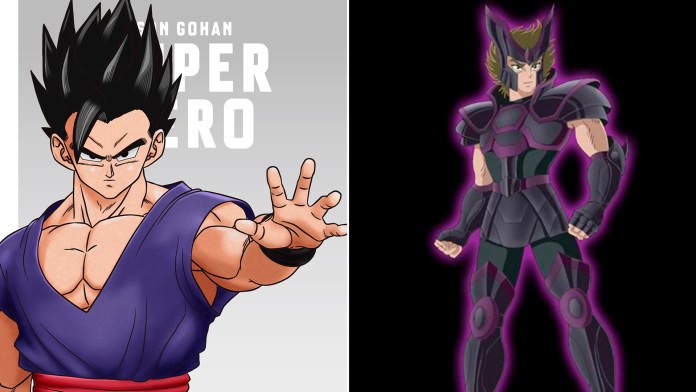 Despite the fact that the first role he played in Mexican dubbing was 17 years ago, his career allowed him to be considered as part of the cast of Dragon Ball Super Super Hero (Photos: twitter/@gokunismo, Caballerozdelzodiacoblocmilenuim.blogspot.com)

For him his time as an actor ends when he gets off the stage and one of the most important aspects in his life is that the fans let him know the moments in which he came to mark themmade them smile, made them cry or whatever another emotion that has evoked them because that’s what he lives for.

– How did you manage to bring Gohan to life, such an important character in the successful Dragon Ball franchise?

“I worked on it like any other character, with the classic: Who am I, where do I come from and where am I going?as are the bases of any fiction that we addressed, in addition to this, Lalo gave me some indications of what material to see in order to better understand what was needed, since he would not have been able to complete the saga in a timely manner for the premiere.”

Today Mexico won.
It is confirmed that the actor Luis Manuel Ávila will be the new voice of Gohan in Latin America for the next Dragon Ball movie, Dragon Ball Super: Super Hero, this after the death of the actor Luis Alfonso Mendoza. pic.twitter.com/i9G8sLNTD3

– How was the acceptance by the fans when it was revealed that you would be the new voice of Gohan?

“I had already experienced a similar situation with the Family P. Luchein which I could not reveal that I would be the character of Junior and in the case of dragon ball it was the same situation. When the news was released on July 11, 2022 through social networks I received an avalanche of positive messages and we became the number one trend in Twitter”, stressed the actor.