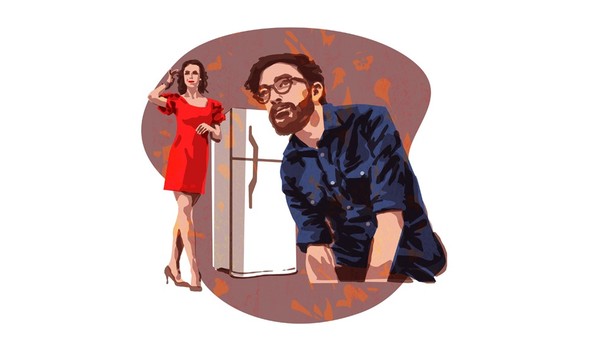 Cabule took a seat on the gleaming parquet floor of the empty apartment. She was waiting for the new refrigerator. Throughout a stormy sentimental life, I had changed my refrigerator more times than my ideas. He had been told that the refrigerator would arrive between 8 in the morning and 2 in the afternoon. It was twelve midday.

Those six hours were not innocuous: the buyer was attentive to their passing. Sometimes, for whatever reason, he had already gotten rid of the old refrigerator and products needed to be moved to the new. Or he moved with certain products in a bag. Or she just couldn’t stop thinking that six hours would have to pass before she would have a refrigerator again.

But this time, Cabule thought, when the intercom rang, he would resist. He wouldn’t wait six hours. It had already been too many six hours of waiting in his life. It was time to challenge that certaintythat opinion, that unverifiable dogma.

The changarines took the refrigerator up and left it in the place indicated by Cabule. He handed them the tip and asked if they knew why he shouldn’t plug in the fridge for six hours after receiving it.

“Some of the internal fluids,” a changarín speculated.

“Mercury, lead, I don’t know,” added the other.

On the cell phone of one of the two, a calf rang, and they left. Cabule waited to hear the elevator go away, and plugged in the refrigerator. He feared an explosion, a flash, an extraterrestrial noise. But the refrigerator started with a quiet clamor; and when he opened the door, the interior lights came on.

Cabule removed the ice trays from the freezer and filled them with water; he entered some basic products in the central body. Within a few hours, the ice cubes shimmered and the water bottle had reached the perfect temperature. He allowed a day to pass before confirming his verdict.

The following noon he wrote to his friend Aparicio: – I have ended the myth of the six hours of rest before plugging in the new refrigerator: we can already call it an outdated convention of the 20th century.

Although Cabule had not even hinted at it, Aparicio uploaded the discovery to the networks. She had asked Cabule for photos of the inside of her refrigerator, and she used them to illustrate the news. Soon the challenge spread to thousands of homes, perhaps hundreds of thousands. Cabule soon forgot about the matter, it wasn’t particularly relevant either.

A week later, waking up unexpectedly in the morning, the fridge was open. Of course, he remembered closing it before going to sleep. The light from inside loomed ominously. Everything was as she had left it, except for that open door. Cabule closed it and went back to bed.

In the following days, user complaints flooded the networks and those of Aparicio in particular. In Agronomy, a refrigerator had moved by itself, about fifty centimeters, during the night. In Pompeii, a refrigerator had petrified a cream cheese. Another, in Balvanera, opened and closed its door like the blades of a windmill. It could be, of course, fables, urban myths.

Cabule’s refrigerator had stopped working. He was embarrassed to call the brand and admit that he had plugged it in without waiting the six hours. He left her in stand-by while thinking of what to do.

He resigned himself to breakfast at the bar, and non-perishable food for lunch and dinner. On the fourth night, before covering herself, she heard a voice. For an instant he thought the fridge was talking to him. But she preferred not to think about it and fell asleep.

When five days passed, however, Cabule snacked on his own pride, called the brand and asked for the repair. If asked, he would tell the truth: he had plugged it in as soon as he received it, disobeying the manual. A lackadaisical employee, without prior consultation, announced that a technician would visit him shortly.

But At dawn on day six, the refrigerator called him. She had the door open, the light on, and she was whispering in a feminine voice, like a siren. Cabule woke up to that sensual litany, walked over to the refrigerator, slammed the door shut, and went back to sleep.

In the morning, a woman had prepared his breakfast and was sitting at the table waiting for him. Toast with jam and cream cheese. The fridge was gone.

– Did you open the technicians? Did the brand send it? Cabule asked, puzzled.

“I am I,” she said, for all answer. Her beauty was devastating. Cabule drank the coffee, but she couldn’t eat. Her body had rebelled in unstoppable yearning. She opened her arms for the woman to do what she wanted; and she gave herself to that passion.

cable experienced a love unknown until that season of his life. Not the first time, not the best, not the last. She, who refused to say her name, was his in a soft and final way.

A week passed. She accompanied him, cooked for him, satiated him. There was no argument, no regret. Her skin was an unexpected delight. She soon decided that he wanted her forever. Then they rang the bell of the electric doorman. They were the two changarines. By the time elapsed, they told him, there was no repair, but product exchange.

As they rode up in the elevator, the woman gave him one last kiss, quite deliberately. The changarines took the refrigerator. Within 48 hours, they would bring the new refrigerator. Cabule took a seat on the parquet floor: he was still gleaming.