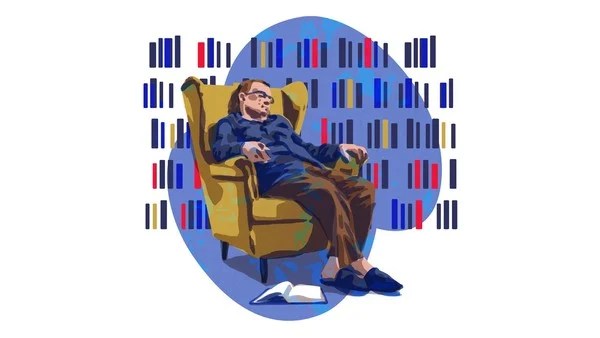 Elías Borgovo, the vocational detective, would never have imagined that the author of the Apparition chapter of the comic strip The inventorwas a young man of 19 years just turned.

Lisandro, now in his late sixties, had created the character in his late 18s, after evading compulsory military service. After a season of weekly pages -including Apparition-, she sold him The inventor to the powerful publishing house Jalgaro, who put it in the hands of its classic and famous screenwriters.

Lisandro, collecting the corresponding royalties, he finally dedicated himself to the real estate business. Like a sort of Rimbaud of the comic strip, he composed his magnum opus at the age of 19 and gave up the effort.

Borgovo I had searched for that chapter for a quarter of a century Lisandro, handing him a strangely glossy magazine after 37 years, explained: – I brought him the episode. I believe it is the only surviving specimen. In return I want you to help me solve a case.

Borgovo recalled a masterful text by García Márquez: after searching for a story by Simenon for decades, upon finding it, he read it standing at the site of the find.

Borgovo, tempted to read in situ that chapter of which he only remembered that The inventor he made his own father appear, yet he controlled his anxiety and paid attention.

– About seven months ago, shortly before her death, totally delirious, my mother let me know that she had killed my father; very randomly, she revealed to me that she “with her own library”.

My father had died some years before, meekly, in his reading chair. Apparently, without pain, and in one of the places he most appreciated. But that confession of my mother, which may well be the invention of a deranged woman, has not stopped spinning in my head, and in my soul. Soon my parents’ house will be sold. The library is still intact. That tells me?

Borgovo took on the challenge and kept the cartoon.

They talked at length about The inventor and Borgovo machine-gunned Lisandro with questions: as always, the authors said much more in their works than about them. When Lisandro finally left Borgovo’s office on Calle Posadas, the septuagenarian detective read the chapter standing up. A marvel.

José’s library -as Lisandro’s late father was called-, in the family home of Almagro (Sarmiento and Mario Bravo), included any of the delicacies longed for by a reader like Borgovo: Morris West, Ira Levin, the complete collection of the Reader’s Digest Selections 60/70/80; the daring color encyclopedias for children predicting the man of the future, invariably bald (not so wrong), the two volumes of everything Nippur of Lagash; fascicles of the third reich; Toynbee, Aron, Huntington, John Toland’s Biography of Hitler.

Borgovo pondered, like the alleged victim, reading to death in that splendid chair. But dying reading by one’s own will was not the same as being killed with one’s library. What would the dying old woman have meant?

The luxurious offer of reading hindered the dedication to the case: Borgovo was lost on the shelves and procrastinated in his mission. He decided to call as a collaborator his remote friend Professor Plones, a specialist in time. Although it was not a specific case for his erudition, he could not think of a better one: the endless library of a dead man was the closest thing to a refuge from time that Borgovo could imagine.

Plons, to whom the high powers had condemned to never live a love story again, accepted the game. But both friends knew their limitations and those of the human race: they could not bear each other daily in the same space. They agreed to alternately spend half shifts snooping and investigating the house: Borgovo one morning, Plone one afternoon, and vice versa.

They had lunch together at the cevichería on the corner -but everyone at their table, because they did not agree to share that instance either-, and they did exchange conclusions, at the same table, with coffee. Each paid their own. One night Borgovo stayed to sleep. Another, Plones did. Another night Plones asked permission to take a woman; Borgovo passed the request on to Lysander, who granted it.

The next morning-Plones and his occasional visitor had already retired-Borgovo noticed three thick backs of a Chronicle Reader’s Digest of the Second World War. The numerical order caught his attention: 1,2,3. Most of the books were grouped into thematic spectrum, not alphabetical.

Lisandro had pointed out that the library was used almost exclusively by the father. Borgovo chose volume 2 and leafed through it: extraordinary. The meeting on a cruise, on the high seas, between Churchill and Roosevelt, recounted by the American’s son, months before Pearl Harbor, stood out. He returned it to the shelf; but he didn’t put it before 3, but 1.

Borgovo told himself that a reader like José would never have left the volumes in numerical order. There was something in that class of readers, like himself, like José, like Plones, thats prevented sticking to the exact order.

At the end of dinner, drinking tea with Plones, in the cevichería, Borgovo commented on the detail. Plones – a paradox that the time expert made the suggestion to the detective – proposed to check the fingerprints. Borgovo attended with the corresponding equipment and, for the first time together in José’s house, the detective and Plones reviewed the books.

The footprints of Mary, the wife of Joseph, the mother of Lisandro, only appeared in volume 3 of the Chronicle Reader’s Digest World War II, “From Pearl Harbor to Hiroshima.”

-What a spectacular title! Plones praised: the end of the first half of the 20th century in one line. Borgovo agreed: Reader’s Digestwhatever that means, he replied, always seemed to me one of the most sensible ways to read life.

Maria had only skimmed through that volume. But its traces intensified on certain pages of the chapter dedicated to the atomic drama. President Truman -the heroic Roosevelt had already passed away, blessed be his memory-, announced the ultimatum to Japan: either they would surrender unconditionally, or they would face a “swift and absolute destruction”.

“The Japanese Council of Ministers, after a long discussion, decided not to answer it (“mokusatsu”, literally: kill him by silence)”.

Borgovo met Plone’s eyes, the time expert responded with a meaningful look. Borgovo closed the book with a decisive snap and placed it in front of Volume 1.

“Your mother killed your father by silence,” Borgovo handed Lysander back the copy of The inventor; but the author gave it to him: he accepted the verdict, handed down in Borgovo’s office on Posadas Street.

– I don’t know – Borgovo continued -, if they hated each other for something in particular or for the mere fact of living together until death: people in general hate each other for much less than that.

– I don’t think they hated each other -Lisandro speculated- But I don’t know if after fifty they ever loved each other. They couldn’t be separated either.

“She was silent until he died,” repeated Borgovo. A man can bear a certain degree of female silence; then fission occurs. A woman has other resources. When the Japanese high command, to protect the emperor, believed that they were killing the Americans with silence, they were signing their own sentence. The atomic bomb was the end of the war: a silent weapon.

“After all,” Lisandro consoled himself, “unlike life, that war ended well.”