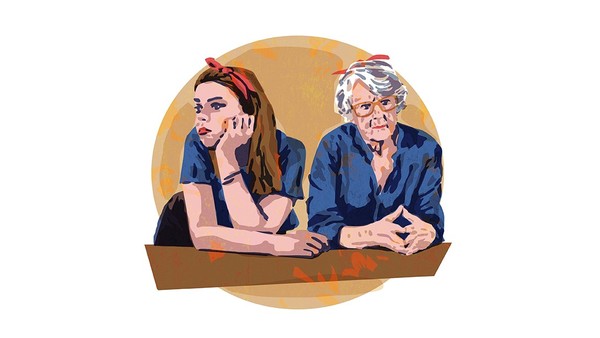 It was one of those bus terminals where it seemed unlikely that a bus would ever come, much less a holiday. Geno had occupied a table in the middle of a deserted bar, and no waiter or manager appeared. counter remained empty,

In the kiosk’s display case adjacent to the bar, last season’s sweets were burnt, melted chocolate, stale candies. flies ruled the placeAs it happened after a silent war.

Jean He went the farthest that could be reached by bus, Gone is a stalled work, a fruitless love, a predictable destiny. But for that, a micro-eruption would be necessary.

The clock in the bar, the only clock in the station, above the counter, on the ocher and acre wall, proudly displayed his motionless needles, Zeno didn’t even have a watch. He had come to that city by night train, and crossed the street that separated him from the bus station.

The last time the train guard told him the time, it was 3 in the morning. I knew his bus would leave at 6, but that’s all I knew. He was completely ignorant of the present time.

suddenly came behind the counter a beautiful woman of incalculable age, Although the temperature in that squid bar was upside down—a cold dampness coupled with an irritating heat—the feminine movement changed Zeno’s perception of the body. The woman wore a flowing dress, and as she began to clear the Formica, her relief brightened the air.

– What will be served? He inquired.

The post-apocalyptic environment so far has mutated to a newly discovered life. Men and women, even in that impossible place, bet again without searching: in A game of unknown rules and uncertain resultsbut terrible.

Geno wondered if the manager, from whom she had just ordered coffee, correctly applied her feminine pout, a word, a kiss, can be completely trapped in that lost corner until old age from the hand of God. It was just for him not to cling to his potential as a man, for whatever reason.

– Do you know that the six o’clock bus is coming? Geno tried. I really wanted some clues.

The woman, he was not sure, blushed. And he turned on the radio. After the Pineapple Juice Advertisement -Unusual-, Weather Announcements and Congratulation to the Viewers (they didn’t give time), began a radio play: unknown woman,

The kind of unheard-of dynamics that the woman had imprinted on that dead spot, so did the radio drama that caught Geno’s attention. A boy went from town to town, and there he had to decide between love and his vocation, whether to continue as the coroner, his teacher’s assistant; Or become a police officer.

His beloved, an employee of the foundation, wanted him to become a police officer. According to him, they should contribute to a happy country. The young man’s dilemma was exciting to Zeno as a listener. Minute by minute the story had progressively aligned their senses. What will Ezekiel decide? But then an unsigned bus arrived at the turn. What if it was one on six?

– Do you know it’s six o’clock? he asked the woman.

She nodded again, but this time she smiled.

– Can you please listen to this part? Geno asked the woman, citing the radio play. Please hear what Ezequiel answers. I’ll ask the driver and come back.

The driver reluctantly informed her that the bus was not scheduled for six o’clock. Geno almost ran back to his desk. His bag lay on the chair, the coffee cold, Ezequiel had already spoken. was not a woman. An agony, like a child’s, invaded Geno’s chest: he felt a pitiful urge to cry, which embarrassed him as if he had lost his identity.

What did my hands do to her? abandoned babyWhat have they done to her, to leave me in the chest, so much pain. But this was not the history of humanity: only weak people like him or weak like Ezekiel. He drank his remaining coffee, stole a croissant, and left enough money on the table.

At six o’clock the driver of the bus got out and shouted his way into the empty terminal. Geno rides aboard, eager to learn that plot point in the radio drama and the woman’s eventual fate. where would he have gone? Would he have heard Ezekiel’s resolution?

Already on the trip, he tried to narrow down Ezequiel’s liking. On Subtle’s radio, the announcers dismissed the final chapter of the date. Jean he asked the driver if he knew the endThe man said no. When she refused, he fell asleep.

At a stop, several hours later, he went out to buy something to eat. The bus left without her: with her bag and her documents. After a few moments of despair, he found that he could actually start all over again. to be another Finding a New Identity Was Unexpectedly Easy,

He was earlier working in a hardware store. Then the bike rack. She later dated a co-owner of a restaurant. And finally he was the owner of the restaurant. They made it the most relevant site in that ghost town. the passengers stayed there Merchants are not very clear and the nations that went to other cities; Lovers are running too.

Geno never forgot the lady at the radio theater or counter. She knew the truth. How did that episode of Ezequiel’s invented life unfold? In that choice was a solution to the riddle of his own life, a clue, an encrypted and fixed message.

Miracles are often hidden in incongruous situations: one night the author of the radio play, Victor Aldun, accompanied by a troupe of actors, entered Geno’s restaurant, El Vijía. Someone called his name Alden, when the screenwriter was already completely drunk. For not clarifying a cinematographer who was the creator of unknown womanGeno might not have known.

He calmed his fickleness, so as not to look mad or frighten him, and asked him, with the greatest care he could, what Ezekiel’s mistake was.

“I don’t have a fucking idea, child,” replied Aldine, although Geno was already quite a gentleman. I think that part was written… (and she murmured the name of one of her boyfriends at the time).

Thirty years had passed when Geno returned at six o’clock to that desolate bar at the bus station, the mute and vanished woman behind the counter, and as randomly as the first time in the small radio theatre. She was there and she was an old lady. The terminal had returned to a normal rhythm, the sweets were contemporary and the coffee machine exuded a permissive aroma.

“All my life I’ve waited for you to come back,” she said. I was wrong.

– Have you heard of Ezequiel? – he asked, as if they had known each other for the rest of their lives and that afternoon be it morning, night or whatever.

He didn’t shake his head.

– I also met the screenwriter – revealed the woman, as if in that statement she was talking about the whole lineage of love, which only included not giving herself to Geno. But he couldn’t tell me.

Gino smiled sadly. The next bus, with a signal and on time, left at six.