- Advertisement -
Daniel Crutze manages to introduce all kinds of melodies to the elegant parties where he plays (Photo: TikTok/@crutze.musica)

Although TikTok dances and memes or funny videos predominate, there are content creators who have taken advantage of this social network to show their art or provide useful information to users, one of them is the concert pianist Daniel Crutze.

In various interviews, the musician has expressed that his mother, father and sister are dedicated to playing piano, so he “inherited” the talent, being in contact with this art since he was a child, at the age of 17 he decided to study in the Superior School of Music of Toluca. After an opportunity to win a contest, he concluded his studies at the Milan Conservatory.

Daniel Crutze has gained popularity on the short video social network by perform all kinds of music and not just academic or culturedbut since he plays at restaurants and lounge parties, he adapts any melody to sound fun and elegant, even if it’s songs like The Anxiousof Marano group. 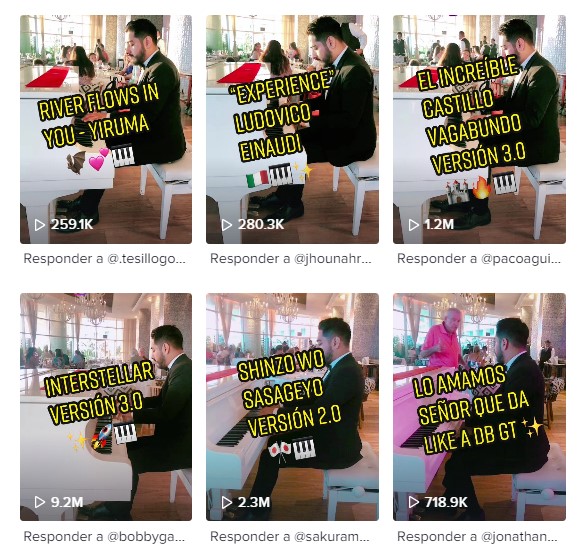 This is how many of this pianist’s requests are (Photo: TikTok/@crutze.musica)

In one of his TikTok videos, he performed this song in front of a foreign couple, telling them that it was a “traditional Mexican romantic song”, but in another recording Daniel played it on his piano to please a family at a party.

The musician who calls himself El Rey Midas del Piano has a great ability to ensure that all his songs have a clean execution, through his TikTok account, he also attends to the requests made by his followers, but he is not limited to that. , but answer questions and curiosities about your work.

A CUTE ROMANTIC DETAIL FOR MY NEW FRIENDS, COURTESY KING MIDAS OF THE PIANO 👑🐽🎹 #humor #piano #for you #fyp #viral #crutzemusic

He recently stated that it bothers him when someone “pretends to know something they don’t know” and asks for songs whose scores weren’t originally written for the piano. Nevertheless, he likes it when someone wants to share their knowledge with him or even asks him to play together.

The requests of his followers – he has more than a million on TikTok – are very varied, since he recently published a video where touched My Baby Fiu Fiuthe remix and cover of Thank you by Dido, but made by Tito Silva and Tefi C. To the pianist’s surprise, the attendees of the elegant party where he played it knew the words perfectly and instead of getting upset, they began to sing along.

Among other songs, El rey midas del piano has played melodies such as Se merita by Junir H, the classic soundtrack of mario brosthe Sontata Appassionata of Beethoven, several versions of Bohemian Rhapsody by Queen, In the hall of the mountain king in the company of Argentina Duran, River Flows in You from Yiruma, Ballad I -Your Lie in April, Clocks by Coldplay and even the opening theme of The magical godfathersa Nickelodeon cartoon.

The pianist Daniel Crutze has explained on many occasions that one of his soundtracks is that of interstellar (2014), composed of Hans Zimmer. That is why every time they make a request with songs from this soundtrack, he does not hesitate for a second to do them.

The pianist treats all pieces of music equally and little by little has gained fame for “dare” to mix the great musical ability that has with their personal tastes, academic or cultured music and the random requests of their followers.