Thalia once again she surprised her fans with her content on social networks, although this time not for the better, because the singer alerted what are they using fake profiles to reach his fans with a message that his team is not spreading, this with the intention of steal private information.

Through her Instagram account, this July 30 Thalía announced that several profiles are posing as her alleged representativesbecause not only are they profiles of people unrelated to the singer, but one of the tricks they use to make themselves credible is to have a considerable number of followers and contact only users who constantly interact with the content of the famous.

“Do not be fooled. Thalía’s team does not contact anyone saying that she is her manager. This account is sending false messages to all fans”, reads one of his storiesin which he also shared a screenshot of the message that the fake profiles sent. 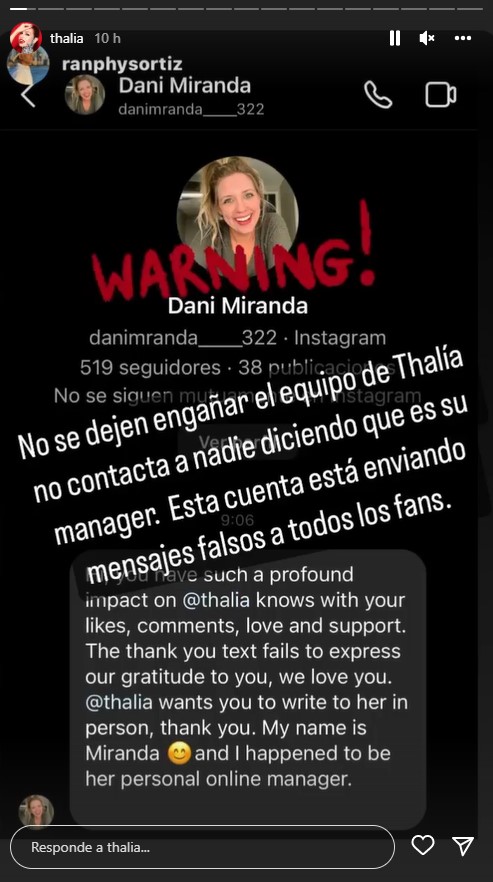 Thalía asked her followers to report the profiles if they received the message (Screenshot: Instagram/@thalia)

“Hey you have such a profound impact on Thalia as she knows all of your likes, comments, love and support. This text of thanks does not express all our gratitude to you, we love you. Thalia asks you to write to her in personThank you. My name is Miranda and I am your personal manager”, it reads in English.

And it is that this same message would have reached several users, which is why the singer and her team decided to take action, because after her fans respond to this message, fake profiles would ask for personal information.

In addition to the profile with the name Daniel Mirandathe message was also coming from another call “Sophia”. 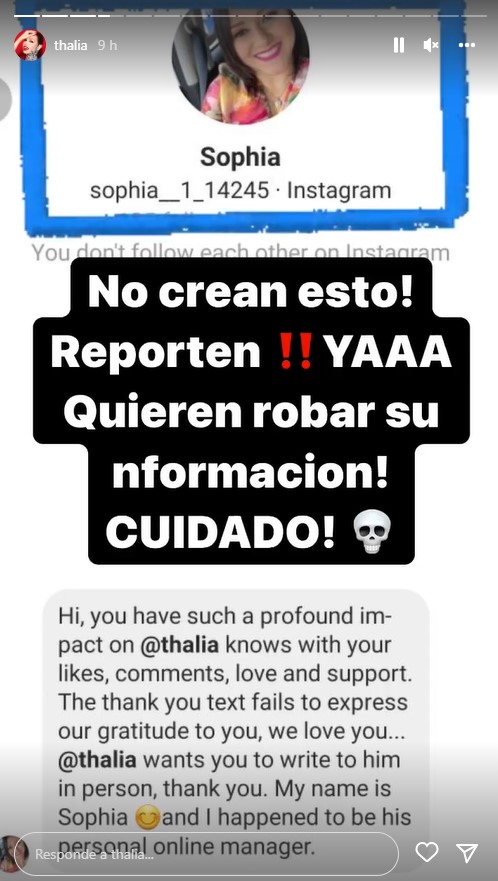 Thalía explained that there are two profiles, one under the name “Sophia” and the other “Dani Miranda”, but they send the same message, only changing the names (Screenshot: Instagram/@thalia)

“Don’t believe this! Report!! Yaaah. They want to steal your information! Be careful”, was one of the messages of the interpreter of I don’t remember.

“Remember that Thalía speaks to her fans directly from her team, manager or management. You will never ask them for private information. Many have sent me a message asking me about these two fake accounts, that’s why he decided to make it public. Alert! Please don’t be fooled. Thalifans, spread the word!” 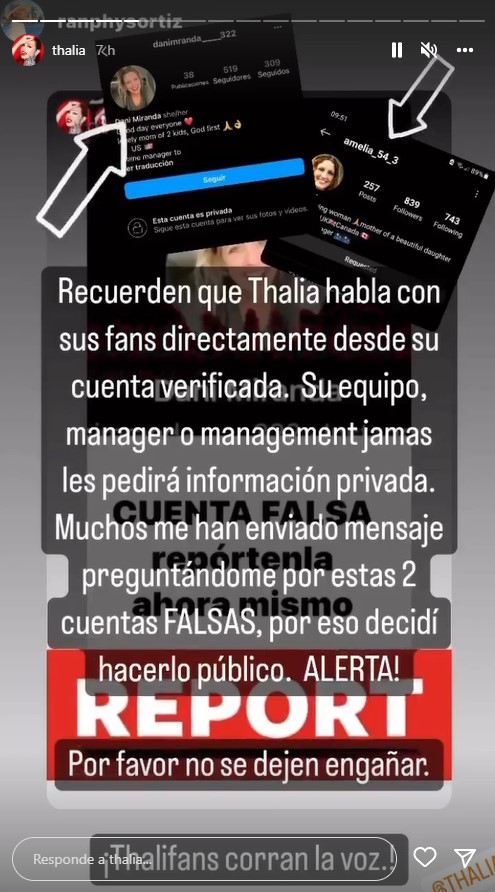 The singer pointed out that she has received many messages from her followers showing her the same message from two false profiles (Screenshot: Instagram/@thalia)

It should be remembered that Thalía is one of the Mexican artists with the largest number of followers on her social networks, because with her unique and fun content she has managed to captivate all generations.

Only in his Instagram account, from where the messages of the false profiles are coming, he has 19.7 million followers. On Twitter it exceeds 9 million followers and on TikTok this July 30 it reached 11 million.

It has been through these platforms that the interpreter of since that night has become a trend and topic of conversation for its funny videos. 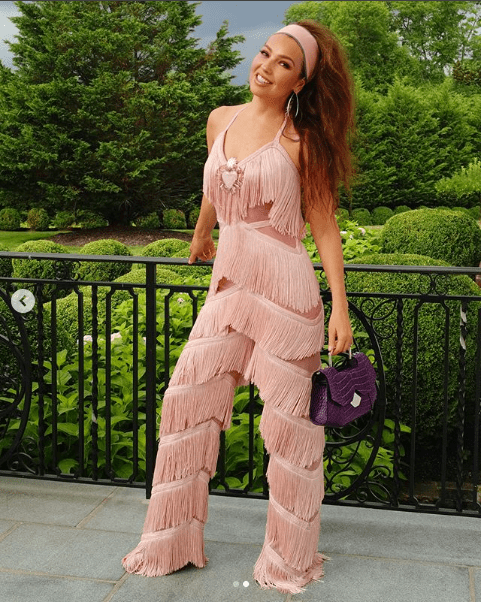 “Hear me, listen to me” was the beginning of Thalía’s success on social networks, although previously she had already gained many followers for her way of dressing and her outgoing personality (Instagram/@thalia)

One of the first videos to go viral is from 2018, when Thalía was making a live broadcast from Instagram, but she was not sure that her audience could hear her, so she began to ask: “Do you hear me? Do you hear me?”and immediately began to give it an intonation that began to dance.

This turned out to be so funny for those who saw it live, that there was no shortage of those who recorded it and spread it on the networks. The fame of this video made the singer even release her single They hear me, they hear me.

Celebration of the Week Olivia Newton-John’s ‘Physical’ goes to No. 1 – Billboard

This is what Laura Bozzo looked like in her youth before she was famous; Has she changed herself?