Ryan Reynolds filmed his own colonoscopy and shared the result to raise awareness: “It has saved my life”

Ryan Reynolds filmed his own colonoscopy and shared the result to raise awareness: “It saved my life”

Ryan Reynolds, 45 years old, underwent a colonoscopy to highlight the importance of this intervention in the early detection of Colorectal cancer. The Canadian actor made a bet with one of his friends and lost so he had to let them record how his first study of this type was done. What was not expected that in the process some polyps which had to be operated on.

Reynolds, who is also Vice President of Welsh football club Wrexham AFCshared a video that was produced in collaboration with Lead from Behind and the Colorectal Cancer Alliance.

The star of “Deadpool”, father of three children with actress Blake Livelyjoked that he would only agree to publicize the procedure if his friend and co-owner of the football club, Rob McElhenneyI was learning to speak Welsh. The actor lost the bet and complied: he recorded his visit to the hospital for his colonoscopy and shared the result with his more than 40 million of followers to raise awareness.

“I would never have had any medical procedure done on camera for it to be shared. But not every day you can give visibility to something that can save lifesthis is enough motivation for me to let a camera go up my butt, “explained the actor.

“Rob and I both turned 45 this year and, you know, part of being this age is getting a colonoscopy,” Reynolds said in the video. “He is a single step that could literally, and I mean literally, save your life.” 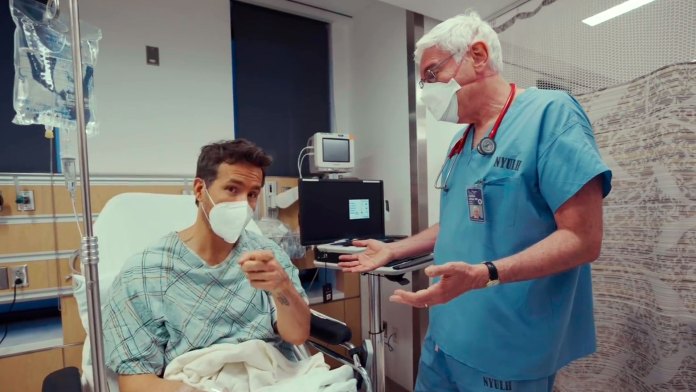 The video begins with Reynolds’ tour of the health center, NYU Langone Health, where the colonoscopy was performed.

After his 30-minute rectal exam, Reynolds is seen waking up from anesthesia, and then doctor Jonathan LaPook, the person in charge of conducting the study, analyzing the images of the intervention, which showed the existence of a polyp “extremely subtle” on the right side of the actor’s colon.

“This was potentially a lifesaver for you”, the doctor explained to the actor. “I’m not kidding, I’m not being dramatic. This is exactly why it is done. You had no symptoms, ”said the specialist.

LaPook told Ryan after removing the polyp that he has thus interrupted “the natural history of a process that could turn into cancer and cause all kinds of problems.”

“Instead, we were not only able to diagnose the polyp, but we can remove it. No one would know I had this, but Reynolds reached the screening age, 45, had a routine test, and there you have it. That is why people need to do this analysis. this saves lives”, added the doctor

In the second part of the video, McElhenney is also seen preparing to undergo a colonoscopy. In her case, the study was also revealing: Doctors found three small polypswhich they said were not serious and they were able to remove them.