Color is the least important when it comes to rivalry. From what seems to have been a coincidence according to hundreds of users on social networks who noticed that while Rosalía ended her Motomami Tour in Spain and exposed long and impressive red hair, illuminated by reflectors and lights that helped her To steal attention, the singer Karol G taught through her social networks that she had dyed her hair the same color.

You may also be interested in: The reason why the Barbie doll inspired by Karol G will not be sold

In recent weeks, the renowned Colombian singer said goodbye to her hair with a blue diamond hue, which she has worn for just over two years. A look that she made, in part, that many identified her as the Bichota; however, wanting to go through new challenges and close some stages made it possible for a path to be opened in an unprecedented experience, both musical and personal.

“To say goodbye, my blue hair and I went on vacation to some of the places that are on my dream list. We behaved well, we behaved badly, we ate a lot, we danced a lot, we drank a little more…”told in his Instagram stories, where he wanted to remember and say goodbye to “people I loved very much, of so much pain, of so much immaturity, of so much evolution, of incredible successes…”

You may also be interested in: Karol G moved to tears by the moment she lived on her trip to Africa

In addition to changing her Instagram profile picture and choosing the animated version of the Little Mermaid, who is one of the most distinguished Disney princesses because of her coppery red hair, she made a post in which made it clear that she had not seen her change of look for two weeks.

Karol G says she has been dyed for 2 weeks, with red hair

”2 Weeks In Love With Seeing Me Like That In The Mirror And Without Being Able To Show Them … So That When They See Me On The Street They Tell Me – Eaaaaa Maria Bebeee How That Red Hair Looks On Chimba I Love You Well !! Bai” said the paisa and renowned singer in the description of her video.

On the other hand, the Spanish singer-songwriter, who had already dyed her hair in the same reddish hue in February, recently shared several photos on her Instagram account for her 21.1 million followers: “Very grateful for the love that my people in my country have given me and very excited for the next thing that is coming! Latin America and the US the motomamiiiiiiiiiiii arrives in no time ❤️”. 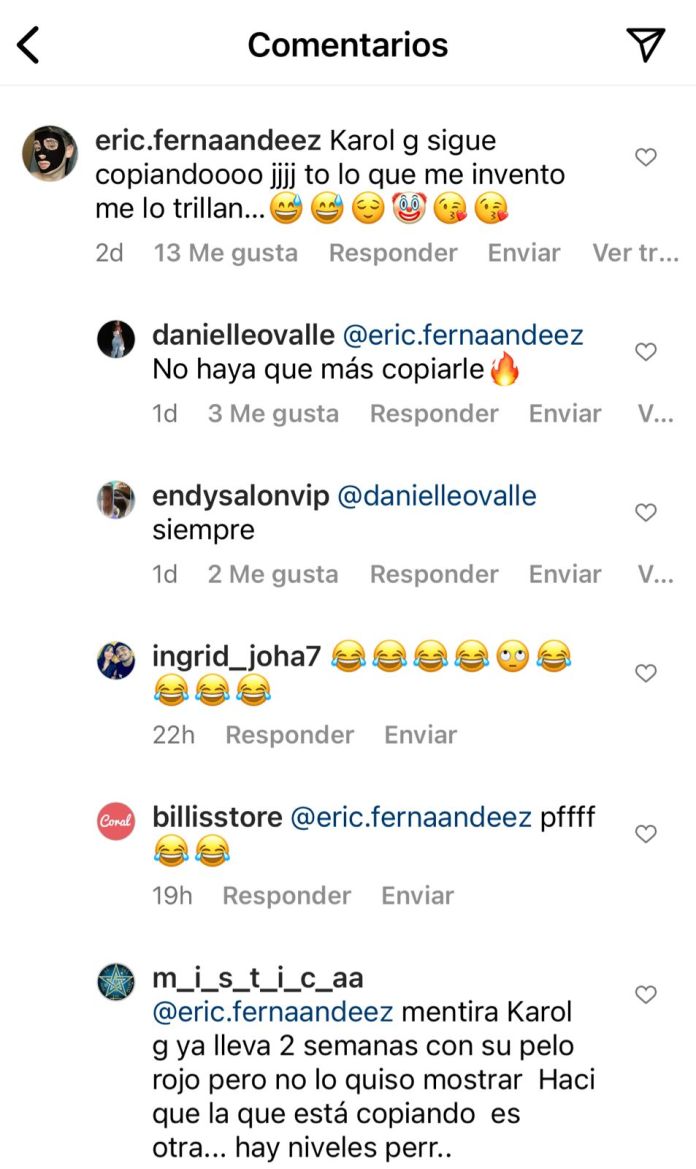 Fans discuss the hair of Rosalía and Karol G

In the comments to the reel of images on Instagram, some fans of the two artists alleged that

-”Karol g keeps copying”; ”There is nothing more to copy him”.

– ”Lies, Karol g has already had her red hair for 2 weeks but she didn’t want to show it… the one she’s copying is another… there are perr levels…”

This has not been the first time that the followers of the singers have expressed their opinion about which artist copied the other, because in 2021 the production of the video clip of the single by the tusa, video made by Karol G, with the colors used And till a characteristic pose of Rosalía.

You may also be interested in: What does Karol G’s blue hair mean?

Those who are not looking for media fights hope that the coincidence is the announcement of a collaboration between these two greats of urban music.

They also remember that in 2021 Karol G mentioned, “I think it is something that people created and that has gained strength because we are not the closest artists, but there is a lot of admiration and respect.” alluding to the fact that there is no rivalry between her and the Catalan singer-songwriter.