In the midst of the scandal over accusations of incest by his nephew, Ricky Martin surprisingly released a new album of only six songs on Wednesday.

The novelty comes almost a week after appearing in court for this alleged case of domestic violence.

Play is the name of the production, which has the Mexican group Reik and the Colombian artist Keityn as guest artists. 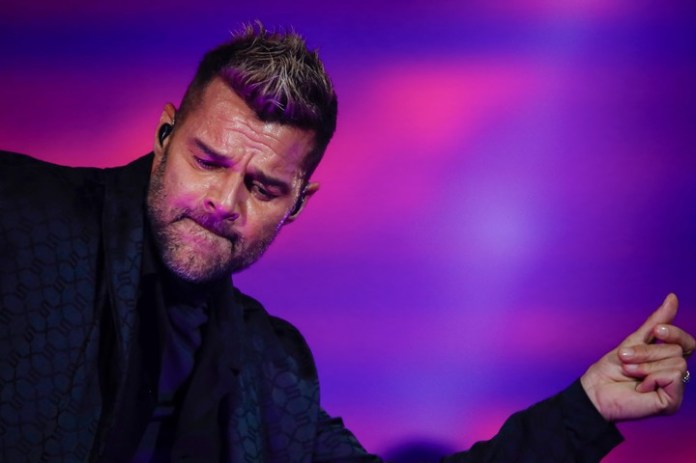 Ricky Martin. The artist’s lawyers assure that the complaints against him are based on a falsehood. Photo: AFP

“Making music, selecting the songs and sharing them with you is wonderful,” the artist said on his Twitter account.

“They have been doing it for 38 years and without a doubt their reaction is the motivation that drives me on this complex journey called life,” said Ricky, 50, who started his musical career with the group Menudo as a teenager. 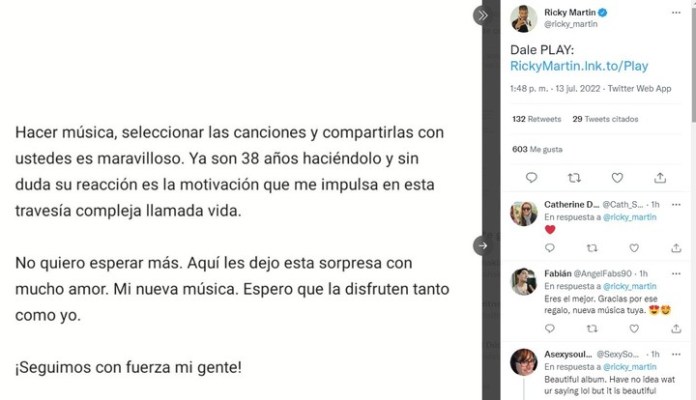 “I don’t want to wait any longer. Here I leave you this surprise with a lot of love. My new music. I hope you enjoy it as much as I do. We continue strongly my people!”, he highlighted on his social network. 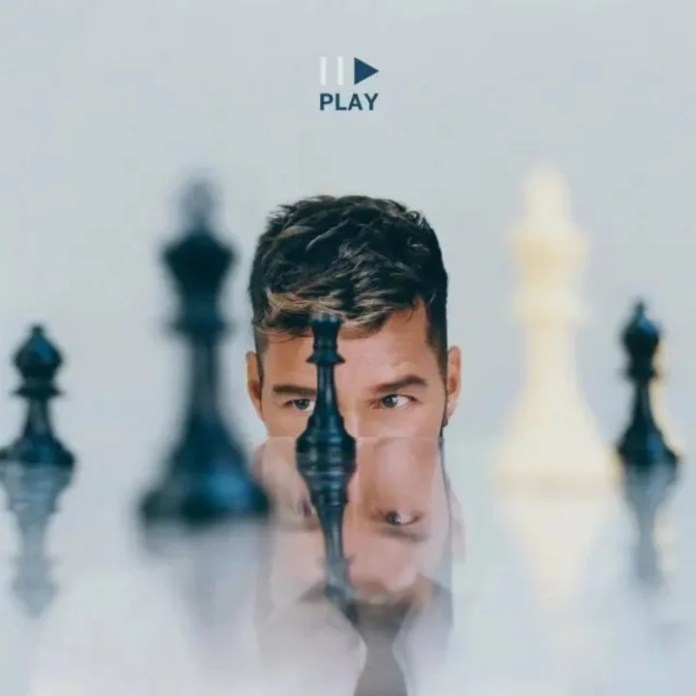 The cover of the new Ricky Martin album.

The six themes included in Play are Acid Flavor, Amordio, Paris in Love, Queen of Hearts, with Keithn; Another night in LA and sometimes good and sometimes badalong with Reik.

Martin was accused in court by his nephew, who claimed to have had a romantic relationship with the musician for seven months. Due to this accusation, the singer must appear on July 21 at the Court of First Instance of San Juan, in Puerto Rico.

The crime of which he is accused falls under Law 54, which protects victims of domestic violence, in which an ex parte protection order has already been issued. The court order was issued on July 3 by Judge Raiza Cajigas Campbell, of the aforementioned court.

As it is a case under the Law for the Prevention and Intervention with Domestic Violence, the Puerto Rico Police does not reveal the name of the petitioning party. However, today it transpired that it is a nephew of the artist.

According to the Puerto Rican newspaper the spokesmanthe order indicates that the parties were related for seven months and separated two years ago, but Ricky Martin has not accepted this separation.

The document alleges that the artist frequently calls the petitioner and has even loitered around his residence on at least three occasions, for which “the petitioner fears for his safety.”

That same July 3, Ricky Martin affirmed that the allegations of domestic violence and for which he faces a protection order, are “totally false”, and assured that he will face said process “with the responsibility” that characterizes it. 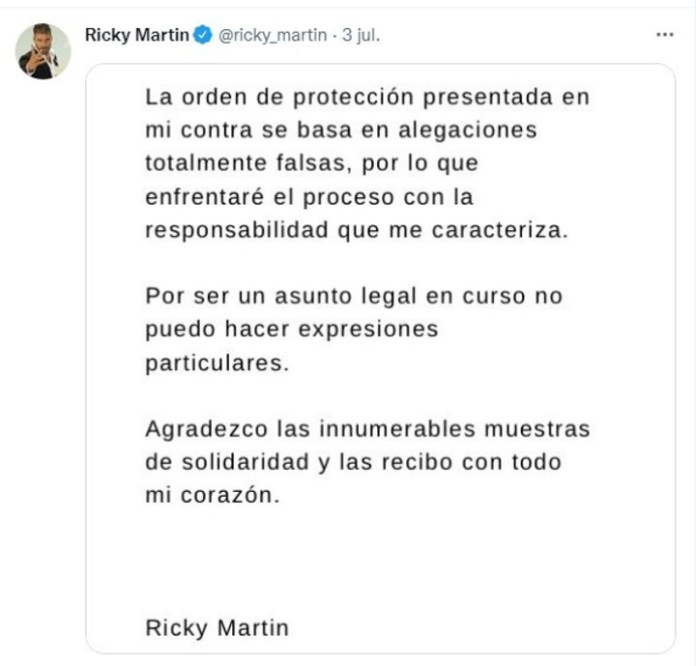 The interpreter of great musical successes such as The cup of life, The bite, Livin’ la Vida Loca Y Mariaamong many others, added that “because it is an ongoing legal matter” he cannot “make particular expressions.”

The penalty for the crime of incest, in Puerto Rico, if proven, is 50 years in prison. The artist’s legal team also assured that the allegations of domestic violence are “completely false”, after a protection order was issued against him. 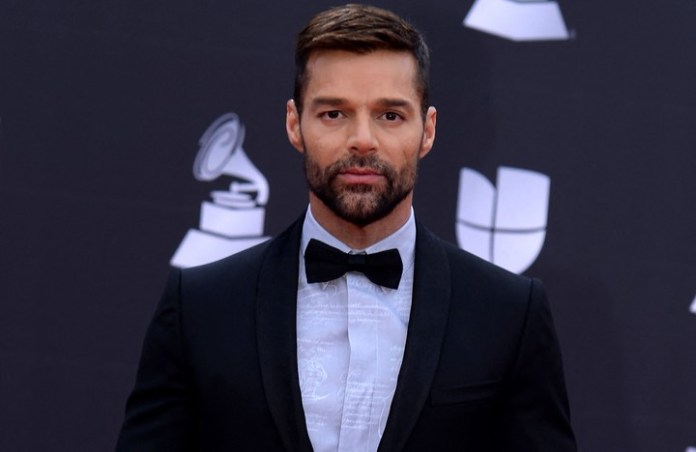 Enrique Martín Morales, better known as Ricky Martin, has been married since 2017 to the artist of Syrian origin Jwan Yosef and is the father of four children, conceived under surrogate womb.

Although until yesterday the identity of the complainant was not known, it was a brother of the singer, Eric Martin, who revealed the name, Yaddiel Sanchez Martinand in addition, he assured that the young man who denounces him has mental problems.

Yaddiel, 21, accuses his uncle of incest and, in turn, he has a complaint against him, by a woman, for harassment.

In the first hearing on July 21, the son of Vanessa Martin, the artist’s sister, will have to prove the complaint against his famous uncle.

The singer’s lawyers, for their part, assured that said complaint is false, without providing further details.