Michael BublÃ© was moved by the surprise prepared by his son Noah: â€œMore talent than in my whole bodyâ€ The Canadian singer recorded an emotional moment with his firstborn and Luisana Lopilato reacted with tenderness upon seeing the song that touched

The last weeks Michael Buble was on tour and visited different cities in Europe to present his album higher. During much of the tour he was accompanied by louisana lopilato -who is about to become a mother for the fourth time- and her three children. At the end of all the dates, they returned to their home in Vancouver, Canada, and there their firstborn Noah showed him the piece of music he had been preparing for months, a song of great emotional value for the whole family..

The Canadian interpreter published a video on his Tik Tok account where he is seen accompanied by the 9-year-old boy, sitting in front of the piano in the living room of his house. He then starts playing a recognizable tune for his fans: it’s about “I’ll Never Not Love You”, the theme that he released in February with a fun video clip that had Lopilato as a co-star, in honor of their love story.

“Noah surprised me when I got back from my tour, he really worked really hard to learn this song. I’m so proud of my boy!”, expressed in white letters on the clip. Then she also replied on Instagram, where she expressed her admiration for her: “More talent in her little fingers than I have in my whole body!”. Luisana was moved to see the images of the father and son artistic moment and wrote: “My baby! (My baby)”.

The actress and the singer have been together for more than fifteen years, and they are the parents of Noah, Elías and Vida. The choice of this particular song moved the couple not only to see the little pianist so excited, but also because The whole family participated in the final scene of that music video and it was the way they announced that another member was on the way. They were the first images of Lopilato pregnant, and from that moment they shared tender posts with their followers.

A couple of years ago they had already hinted at their eldest son’s passion for the piano, showing his fingers on the keyboard. “You taught me to be a mom, to love more than I thought I could and to never give up. I will accompany you in everything you like to do and I will be the first in line, always”wrote the actress at that time in the epigraph of the publication. 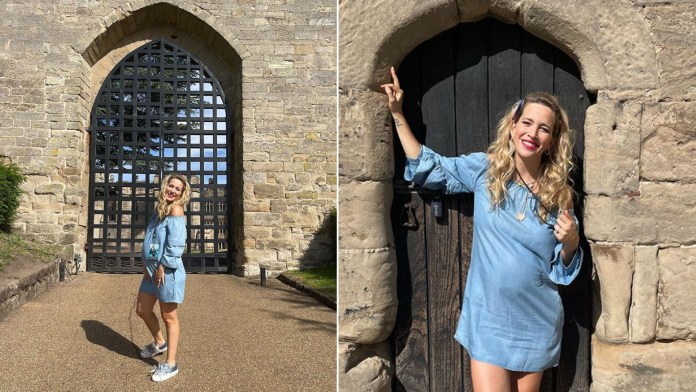 Luisana Lopilato during the Michael Bublé tour, in the final stretch of her fourth pregnancy

It should be remembered that in 2016 the marriage went through the worst moment when Noah was diagnosed with liver cancer at the age of two. The little boy started treatment and then underwent surgery that was successful. The relief only came a year later, in April 2017, when it was confirmed that he had overcome the disease. “Noah is cancer free”, was the message that the parents sent to their relatives the next day, after receiving the best news after the operation.

Last March Bublé visited the program the anthill in Spain, and when Pablo Motos asked him about the health of his firstborn, he immediately merged into a hug with the driver and his eyes became bright. “The truth is that it is a wonderful opportunity to look at everyone who is watching the program and say thank you, and forgive me for getting emotional at this time”, he commented moved. “Thank you for your support, your love, your prayers, because people don’t know how much it meant to us in such hard times, and the truth is that this present is wonderful,” he concluded.