From pastorela to terror: TikTok users showed their “worst costumes” of children’s festivals

On TikTok, users join trends of all kinds, although most are about dances, this social network of short videos has also served for people to tell funny anecdotes or take the opportunity to give makeup tips, however, in recent weeks July, people shared their kids festival costumescausing laughter and even “fear” of unexpected results.

Very similar to the memes of “expectation vs reality”the users showed the costumes that their parents devised when they were children, despite the fact that the intention was only to fulfill some spring task, play or pastorela, lack of time or adequate materials caused the suits to end up look nothing like the commissioned target.

The viral audio in which people put their childhood memories is a remix of the song Sometimes When I’m Lonely by Dan Croll, in fact, this musical theme had already been used in thousands of videos to take the translation of the lyrics and show “something” in what is thought in random moments of life.

♬ Angeleyes (Sped Up) – Sometimes When I’m Lonely, I Sit and Think About Him – Hiko

Crooked masks, misplaced paint, exaggerated proportions, and distorted makeup became the characteristic elements of these “strange costumes”, among the comments of various videos, there are those who even ask that Netflix make a horror series inspired by the costumes or at least, that they write a creepypasta (horror story spread on internet forums).

“They ask my mom to dress me up as a star of Bethlehem,” wrote a user in her video, taking advantage of the viral audio music change, showing that her family decided to make the suit with toilet paper and bandages, causing her to instead of looking like a star, the girl looked like a mummy or some kind of zombie hanging from the ceiling already in the school pastorela. 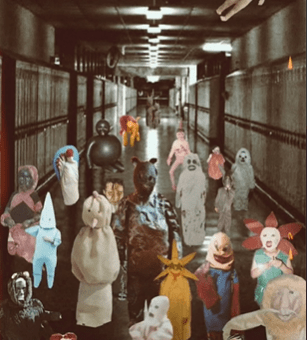 This was how some of the compilations were (Photo: TikTok capture/@lea.betancourt/@liz_nessa/@marmohappy_16/@marthc06)

The same thing happened with a grape, a beaver, a camel, a spring flower, a clown, and even chickens. Although some users took photos that did not belong to them, the audio of the TikTok costumes added thousands of videos of people showing off their “failed” homemade costumes.

As the audio went viral, people created a involuntary competition of “worst disguises” of children’s festivals, so far there is no common consensus or verdict, but in each new surprise comments such as “The star keeps winning” either “This one makes the one with the spring flower beautiful.” 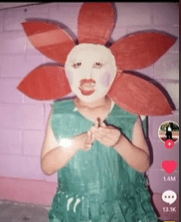 This is a spring flower gone “wrong” (Photo: TikTok screenshot/@lea.betancourt/@liz_nessa/@marmohappy_16/@marthc06)

What is certain is that one of the most shocking horror costumes was that of the user @rodrigopinanueva, who showed a photograph where he was with a “double head”. The most striking thing about the characterization was that instead of using fake blood or paint, the young man’s parents used real bird blood: “The head had chicken guts, but I vomited and they better take it off”Rodrigo wrote. Among the comments, phrases such as “Are your parents okay?” or “and didn’t you get salmonella?”

As there were those who began to compare them with popular horror characters, some accounts dedicated themselves to making collages, montages and compilations of the best costumes. On the other hand, some young people “regretted” not being able to join the TikTok challenge because their families made excellent suits that made them look cute and of course, it was about characterizations totally attached to the original commission of the teacher or the teacher.

“My mom was a seamstress and she always made me my pretty costumes” and “Not even when it was improvised, Once he dressed me up as a pumpkin. My white dress and mask is pumpkin (very pretty) Not tragic.” They were phrases that could be read in some comments. Finally, each person showed that his parents cared about fulfilling the tasks and they did their best according to their possibilities and creativity.

Caught us all asleep! Newscast misspells the word ‘preliminary’ after earthquake