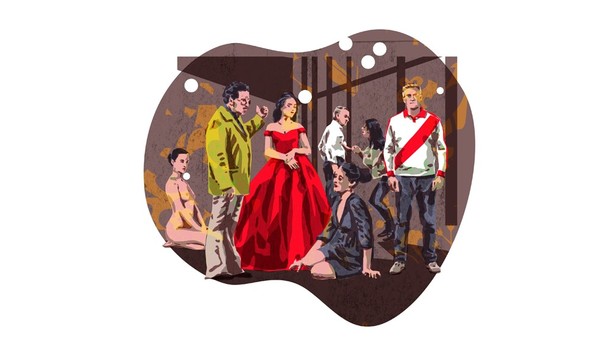 Alonso took a seat at the bar table and ordered a toasted cheese and tomato on crumbless bread. Since he was a child, because of his name, they associated him with the surname of River’s crack number 10. In the year 75, his attention and his memory captured the formation of the two-time champion River. But for the rest of the time, even in his late fiftiesnever again registered the members of the team.

Hardly a Francescoli, an Alzamendi, a Buonanotte. He progressively lost all interest. Nor did he know how the national team was formedexcept Messi.

The waitress brought a dazzling toast: crispy, perfectly au gratin, colorful. The coffee in a jar, barely cut, impeccable. The waitress’s face, smooth, discreet, magnetic, created an aura of mystery in the retreat and as she turned, her body unfolded a constellation of wonders in the bar, other worlds appeared, borders vanished. But she hadn’t left any napkins.

Alonso looked for something to clean his hands with, in the middle of the delight of the sandwich, and discovered that absence. He looked around him: there were maybe seven other customers, no napkin. How could the human being face any meal without napkins? She had witnessed it on other occasions: a roast, pasta, even a cake, without napkins.

This circumstance puzzled him. He suddenly understood the truth: the waitress was in the hands of a very evil sorcerer, she was a princess, a queen, or one celebrated for her herding beauty. The undelivered napkins were actually letters written in secret ink; no one could read them but Alonso. For the rest, there were simply no napkins. For Alonso, it was a message.

The medium was not necessarily the message; his absence, yes: rescue me from this bad sale, do not allow my captivity to continue. take me to the sea But how? The slightest movement could cost him in turn to be bewitched and imprisoned by the Malandras.

He decided to go every morning to order the same toast, which always came without napkins: seek in repetition the solution to that challenge. But at the end of the first week, the waitress was removed from her sight. She no longer appeared. They should have sent her to the dungeons, punished for asking for help.

The waiter who replaced her – before officiating as a cashier – did leave napkins on the tables. Evidently Alonso had been defeated: he accepted his gamble and returned to his routine, without toast, or waitress, or napkins. Even chimeras are brief. He’d had it all: a perfect toast, an eager waitress, an adventure in the making.

His ranching and lack of resolution prevailed: empty hands.

He had never been absent as a set designer from the Teatro de la Notch, but that afternoon it seemed like a return, crestfallen. He set up the faux marble armchair, the coffee table with the magazines from the 1970s -including The graphic with the fold-out poster from 75-, Yurkin’s paintings and the masonry kitchen with the kettle always steaming.

The actors and the director occupied the dressing rooms. At 8:30 p.m. they gave room. In front of a good amount of public, the function progressed correctly, without failures or flashes.

At the beginning of the third act, when the housewife revealed her identity, and her nudity, a woman appeared on the scene, completely out of the script and out of any anticipation: she entered as if she were one of the actresses, playing a character unknown to the cast. Alonso, who watched from the side behind the curtain, backstage, perplexed, speechless, was the only one to recognize her: the waitress.

The text was coherent, and it acted well. For the public, unless some viewer had already seen the performance, it was not particularly surprising. The cast managed to humor him. When the housewife undressed – in the libretto it was the foot for the second part of the third act, and it suspended any objections among the male population -, they knew they had caused a scandal.

The waitress skilfully interpreted her extra lines (she talked about the impossibility of freeing herself, the pretense of believing that there was a true being inside each one, that life always continued its course), she left the scene and retired. They did not see her again at the greetings or at the exit.

Already without the public, between the dressing rooms and the hall, the actors and actresses, and the generally parsimonious director, agitatedly commented on the event. doWhere did that crazy woman come from? Would it be a spectator? An actress of media daring in search of fame? Only one footprint was left on stage: an empty napkin holder.

Alonso attached it to the other elements of the props, and silenced his knowledge. Had she come looking for him? What other answer could there be? He had managed to escape, by an act, from the far-fetched Malandra, and appeared out of nowhere on the scene! Now it was her turn to find her at the bar, where she would doubtless await him.

He bet everything on that plenary, and lost. She was not there. But behind the transparent and greyish glass door she distinguished… Ah, yes… Mustard Merlo. And that was Comelles? There were also Morete, Luque, Pedro González and Jota Jota López. Alonso took a seat next to Passarella, who gave him a friendly blow on the shoulder, as if giving him a penalty kick. Beto himself was missing. Then Angelito Labruna entered.

They met at a central table that the waiter set up, Labruna explained the strategy. After 18 years without being champions, River would be La Maquina again. They would not repeat Perón’s mistake, after his 18 years in exile. The country needed a direction; 75 was a turning point: either it took off, or it sank.

Beto, Ángel said to Alonso, what do you say? Alonso wanted to say that he was not Beto. It was a confusion: the name for the surname. Passarella continued to look at him expectantly. still in the attitude of giving him the penalty kick.

At his silence, the voices lowered in tone, the faces blurred. The waiter distributed the triolés, the vermouth, the napkins, but nobody picked them up. They left in whispers, talking to each other, they had already won the Metropolitan and National championships, Luque put his hand on Pinino Más’s shoulder; strangely, they coincided with Morete and Ortiz, heading for new challenges.

They were like the Kennedy brothers when they walked away from the White Houseand the catastrophe, after having overcome the Missile Crisis.

Alonso remained at the bar. The diners spoke in low voices, only one lady was out of tune giving orders to a niece on her cell phone. They came for him: his niece and his maid. He had to return home: that night he premiered a new set. He had to stop the pot, the casserole, the stew. The waitress waited for him to leave, entered the half-empty bar, cleared the table, collected the tip and lightly wiped it down.