Jose Eugenio Soaresartistically known as Jo Soares, He died at the age of 84 this Friday in São Paulo., according to local media. The Brazilian writer, actor and comedian was admitted to the Sirio Libanés Hospital. The cause of his death has not yet been revealed..

“The patient Jô Soares passed away today, August 5, at 2:20 am, in the Sirio Libanés de São Paulo. He had been admitted to the hospital since July 28, where he was accompanied by the institution’s clinical staff, ”the humorist’s representatives wrote in a statement issued jointly with the aforementioned health center.

Born in Rio de Janeiro on January 16, 1938, in addition to being an actor and comedian, devoted himself to literature and painting. More recently, he had resumed his work as director of plays.

Friends and fans mourned the comedian’s death on social media. “Brazil today lost a unique artist, a comedian who loved his job above all else, an outstanding actor. A brilliant interviewer. A citizen who loved his country and his friends. Jô Soares, thank you so much!”, wrote the singer-songwriter Zelia Duncan On twitter.

Or Brazil lost a unique artist, a comedian who loves his job above all else, an actor for a series. A brilliant interviewer. A city that loves its country and its friends. Jô Soares, obrigado for so much!🥲💔

For her part, the presenter and actress Adriane Galisteu thanked the comedian for “so many laughs, so many conversations and all the teachings”.

“My God, the world without you…. My dear friend, director, counselor, neighbor, how sad… You have always been surrounded by love and always will be! I will continue applauding you and learning from you through your works! Thank you for so many laughs, so many conversations for all the teachings”, he stated.

businessman’s son Orlando Heitor Soares and of Mercedes Leal Soaresat the age of 12 he moved with his family to Europe, where he thought of pursuing a diplomatic career, but his love for art prevailed. 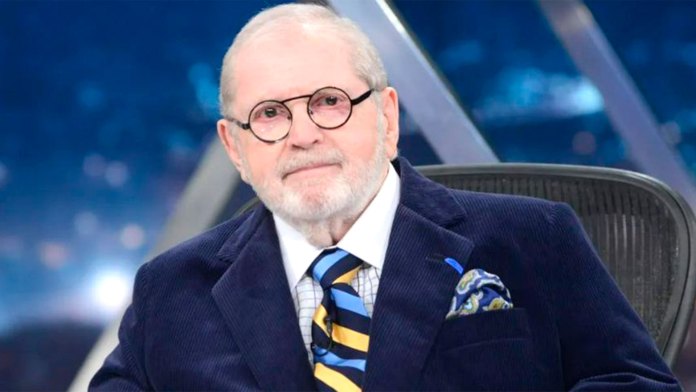 His first acting role was in “O Homem do Sputnik”, in 1958. In 1961 he began to work in TVRecordwhere he participated in programs such as “La Reuve Chic”, “Jo Show” Y “To Family Rag”, in addition to writing the “Simonetti Show”.

Nine years later, in 1970, he joined TV Globe to star “Faça Humor, Não Fazer a Guerra”, program replaced by Saticom in 1973. Three years later, as an actor and writer, he participated in “Planet Two Homens” until 1981, when he began to dedicate himself to his own program, “Alive or Fat”.

jo left TV Globe in 1987 to join SBT and fulfill one of his greatest wishes: host a talk show.

“Jô Soares Onze e Meia” was broadcast between 1988 and 1999, with more than 6,000 interviews with great Brazilian and international personalities. In 2000, the comedian returned to Balloon for the iconic “Programa do Jô”, which ended in 2016.