Corona figures are worryingly rising across the country. From the general public to the stars of Bollywood, the epidemic continues to be seen. Now Alia Bhatt, daughter of filmmaker Mahesh Bhatt, has signed Corona.

Actress Alia Bhatt has revealed that she is positive through Instagram. Alia said that, she has calmed herself down and is taking care of everything the doctor has told her. It goes on to tell that, Alia Bhatt’s boyfriend Ranbir Kapoor was also infected with Corona, after which he had isolated himself and was undergoing treatment at home. Ranbir’s report has now come back negative and he has returned to his work. 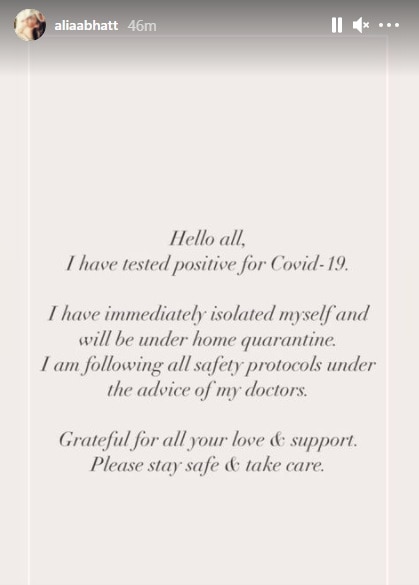 Whereas, now Alia Bhatt has become infected with Corona. Alia appeared yesterday in Juhu, Mumbai along with her boyfriend Ranbir Kapoor. Let me tell you, Ranbir Kapoor and Alia Bhatt have worked in Ayan Mukerji’s film Brahmastra. The film’s set brought many pictures and videos to the media. The film will also feature actors Amitabh Bachchan, Mouni Roy and Nagarjuna along with Ranbir Ranbir Alia.

Let me tell you, in the past, veteran musician Bappi Lahiri was also found infected with corona. Considering his age and health, he has been admitted to Breach Candy Hospital in South Mumbai. His daughter Reema Lahiri said in a statement released from the hospital, “Despite being extremely cautious, Bappi became infected with da corona, but he has mild symptoms of corona. Udvadia has been kept under observation. He will soon recover.” Will go and return home. Thank you for always keeping her in my prayers. “

Tara Sutaria shared a video of her dance from the shooting set, see what’s special

Share
Facebook
Twitter
Pinterest
WhatsApp
Linkedin
Previous articleThey launch new Chucky series, see what the first episode will be called and its preview
Next articleBlake Lively criticizes Ryan Reynolds for trying to deceive her after they were both vaccinated
Drashti Jain