Brothers Juan Rivera and Lupillo Rivera they recently came into conflict, the reason for their disagreement was the audit faced by the company of his deceased sister Jenni Rivera.

At the time, Chiquis Rivera assured that her uncles had not stolen nothing, but for his part, Lupillo Rivera he released a statement that made his brother angry.

“Oh no more my father who takes care of the numbers, it is all that my father has to take care of. Clear accounts and long friendships, it’s that easy. I wish my dad and his record company the best in the world”Lupillo mentioned. 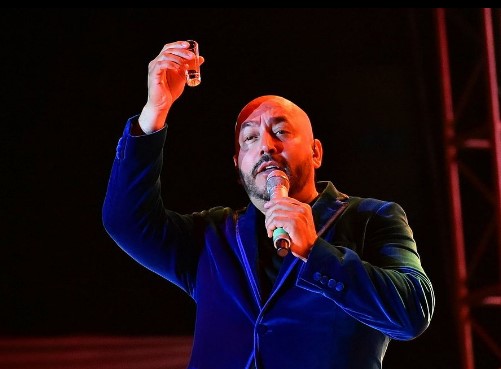 Juan Rivera felt that Lupillo had insinuated that he was a thief (Photo: Instagram/@lupilloroveraofficial)

After that, Juan Rivera exhibited the amount that Lupillo did not pay him and said he was extremely upset because he felt that he had been singled out as “a thief” within the family:

On the other hand, he assured that if Lupillo was looking to create a cordial relationship with his nephews, it was because he wanted to make a series of Jenni Rivera.

In addition, on his Instagram account he published a long message where he mentioned that he used to support the family but would show his defense on a live stream:

“For a long time I defended those I loved and let them run over me and now that I can, even with my LIVES, I respond and whoever wants to believe can believe! PEOPLE TALK FOR TALK and they forget many things, but today I am going to remind you (WITH PROOF) SOME THINGS OUT THERE… That apparently HIS MEMORY HAS BEEN ERASING and now he “kindly” gives some good “ADVICE”, wrote.

It was during that broadcast that he stated that despite the difficulties of managing Lupillo’s career, it had gone well for him, because by 2018 his concert dates were not being sold, so he made the decision to put together a work team with a publicist, promoter and social media people. 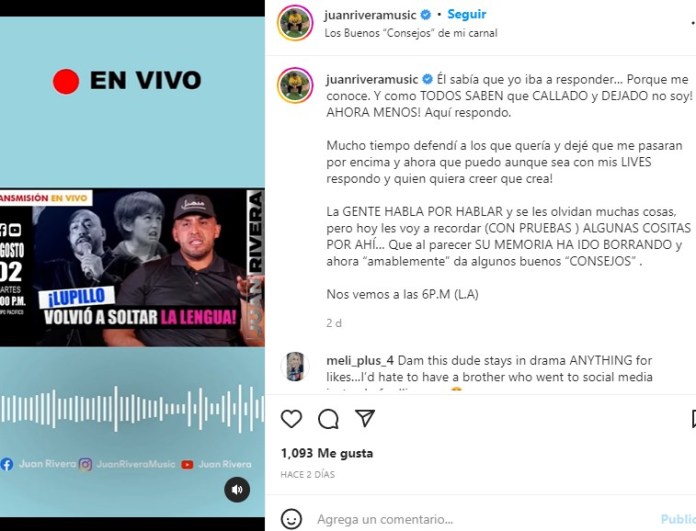 This is how he announced his live (Photo: Instagram/@juanriveramusic)

After the singer had problems with his equipment, Juan mentioned that Lupillo said that his manager “was useless”his brother’s annoyance increased when he had controversies with Belinda, because he did not want to give interviews because It made her sad to be asked questions about her ex.

Juan Rivera also explained that apparently, Lupillo had asked his father for money to try to get into the marijuana business in California, United States, where it is illegal.

In this regard, Lupillo Rivera defended himself against his brother’s accusations, saying that he had not even seen the video:

“The truth is that I have not seen anything of that video, I think it should be like this (meeting without the media) and not air it, but his videos work like that for him, may God bless me and may God help me. take care”, he mentioned for Sale el Sol.

At the moment, Juan Rivera has not replied to his brother’s statements. It should be remembered that in May of this year, he had already declared that I would never work with anyone from the Rivera Dynasty again.

“I think it’s the healthiestbecause look, I am too demanding, there was a time when my brother (Lupillo) had dropped a lot, I grabbed Mario and told him that he had to start working every day, look for positive things, we have to erase the negative “, confirmed in front of the cameras.

This was the spectacular fall of Anahí’s imitator

Juanpa Zurita suffers injury after Yordi Rosado’s slap in the program: “there is blood”