This was the viral party (TikTok screenshot/@netzamagallon)

TikTok has become a very diverse social network, from people doing challenges to sticky dances and users giving makeup tips or showing off their talents. However, it recently went viral. a totally flooded party in some ranch in Jalisco.

In the short recording, the TikTok user @netzamagallon showed a party where a strong current of muddy water ran through the tables of the guests.

What caught our attention was that instead of running to find a dry place or appearing in a hurry to leave, people sat down eating, chatting and enjoying the celebration. “Like when nothing worries you anymore in life”wrote the young man.

♬ My Heart Will Go On (Love Theme from “Titanic”) – Céline Dion

Later, the young man uploaded the same video but with My Heart Will Go ona song that is part of the soundtrack of the film Titanic (1997) which is performed by Céline Dion.

In the video the people looked very calm, there was even a girl asleep between two chairs like in any Mexican party. Although it was not specified if it had been a water leak or an overflow of a nearby river, the users did not wait with all kinds of funny comments. 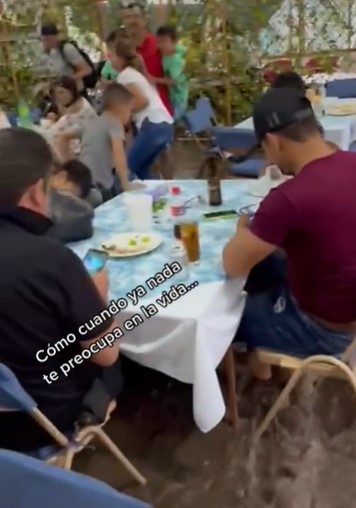 Even the decorative vase withstood the intense passage of water (Photo: TikTok capture/@netzamagallon)

“It was missing that in the invitation it said ‘bring a bathing suit’ at least they did not feel hot”, “The party was Titanic themed”, “Albercada and everything at the same time”, “No one: the parties in Veracruz”, “Between the sleeping child and the theme of the Titanic hahaha they are the right people” and “Looks like someone invited the water” Those were just some of the comments.

In addition, there were those who pointed out that the people attending the flooded party were “the right people”, because they did not abandon their host despite the difficult circumstances in which the party ended.

In other comments, users recalled all kinds of anecdotes, since it seems that floods at parties are very common:

“Once I went to about 15 in Tlalpan and that’s how the water went downeveryone normal, they waltzed, they fell and laughed, 10/10″ and “That happened at a friend’s wedding she was crying and I was the one who started dancing in the rain and everyone followed me and she got happy”.

Recently a very similar situation occurred at another party where the Celestial Band played, a group of people was gathered in the street until it started to rain.

Later, a woman overcame all fear of falling and the sorrow of being the only one still celebrating, so she stood in the center of the dance floor and began to stomp her feet in the middle of the water, inviting the guests one by one to join the second part of the party.

“Everything seemed like the party was over until out of nowhere doña environments 2000 came outappeared and everyone followed the relaxation of Doña Ambientes, even those who were at home returned to continue dancing, “said the person who uploaded the audio.

Seeing the enthusiasm of the people, the members of the Heavenly Band they played again while people danced without caring about getting wet, falling, slipping or fighting against the growing current of water in the street.